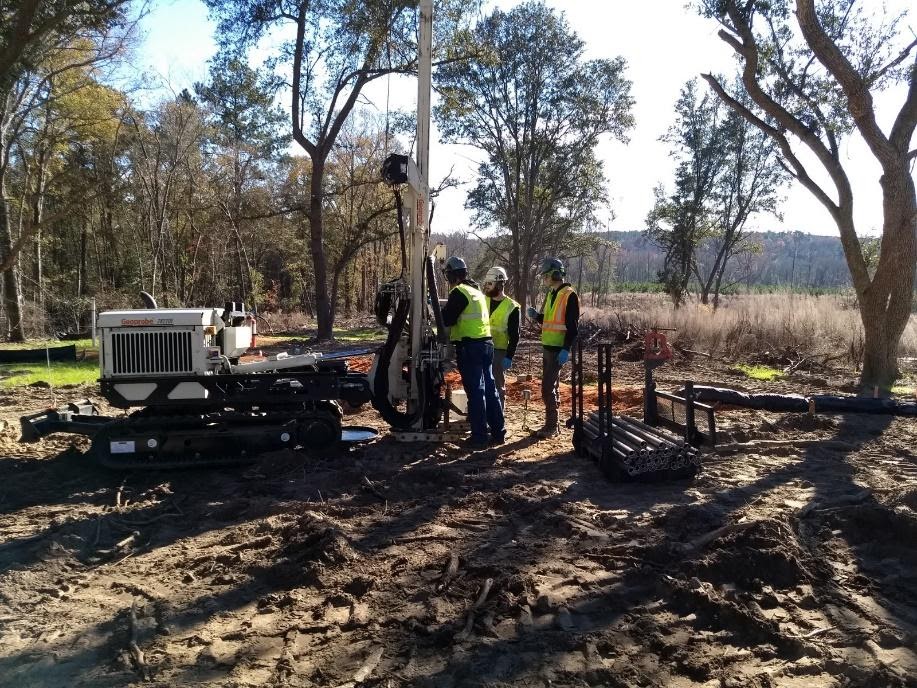 SUMMARY
BOS 200® was injected at a refined petroleum product terminal to remediate LNAPL in groundwater. Within one year after treatment, the site received a No Further Action status.

CHALLENGES
The remedial goal was to eliminate the reoccurrence of light non-aqueous phase liquid (LNAPL), which persisted with no apparent pattern. Annual fluctuations in groundwater elevation were significant with changes of up to 14 feet (ft) observed. The stratigraphy was complex consisting of interbedded silts and clays with a multitude of sand stringers throughout. The complex geology combined with the variation in groundwater elevations resulted in an extremely anisotropic distribution of non-aqueous phase liquid (NAPL) from a depth of 14 ft to 32 ft. No hard analytical date existed detailing the vertical distribution of hydrocarbon mass.

APPROACH
An LNAPL investigation was performed (by others) using qualitative methods that concluded that zones of NAPL saturated soil were not present, and NAPL was residual in nature rather than mobile. Laboratory tests were performed at the Remediation Products Inc. (RPI) Quality Assurance Laboratory using LNAPL from the site and Trap & Treat® BOS 200® to measure the capacity of the product to absorb the NAPL. The test results were subsequently used in development of the treatment design. AST Environmental, Inc. implemented the remedial approach in five specific areas on site in 2007. Roughly 24,000 lbs of BOS 200® were installed within various depth horizons beginning as shallow as 14 ft and extending as deep as 32 ft. Confirmation of distribution was verified by monitoring well water levels and visual presence of BOS 200®. Further, twelve post injection soil borings were completed within the injection areas to confirm distribution of the product throughout the injection horizons.

SOLUTION
24,000 pounds of BOS 100® was injected to address the lack of soil analytical data and unknown vertical distribution of LNAPL. A tight injection grid spacing (5 ft to 7.5 ft) was employed for injections, which were vertically staggered at adjacent points and installed every 1.5 ft in depth. RPI’s Quality Assurance Laboratory provided pro bono analytical support during the field work and post installation to build several lines of evidence showing that degradation of LNAPL was occurring.

RESULTS
Prior to the injection work, LNAPL levels were recorded in all five compliance wells. Upon completion of the injection work, the wells were redeveloped, gauged, and
sampled. No significant reoccurrence of LNAPL was noted during closure monitoring in any of the five compliance wells, and in late 2008, a No Further Action status was issued for the site. The final report to the State Agency specifically noted the evidence of NAPL degradation as part of its support of the request for closure.