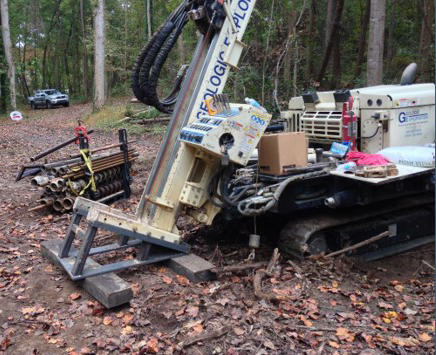 SUMMARY
BOS 100® was injected adjacent to and beneath a stream using a direct push angle drilling technique to successfully create a PRB and limit PCE flux from the upgradient source area into the stream.

CHALLENGES
The Superfund site is a former textiles facility where tetrachloroethylene (PCE) was used in daily operations. Approximately one-half mile downgradient of the source PCE (100-300 μg/L PCE) has been observed discharging into a stream through partially weathered rock and saprolite (weathered gneiss and schist). Based upon stream bank and bed soil sampling and groundwater modeling, it was determined that the PCE was upwelling into the stream from partially weathered rock as deep as 65 feet (ft) below ground surface (bgs). The project objective was to determine if a Trap and Treat® BOS 100® permeable reactive barrier (PRB) could be effectively angle drilled in the wooded and sloped area on the upgradient side of the stream to intersect the plume and reduce or eliminate the contaminant mass flux into the stream.

APPROACH
A BOS 100® PRB Pilot Test along a 60 ft section of the stream was selected to target the area of highest contaminant mass flux into the stream. This determination was based on PCE concentrations in adjacent monitoring wells, streambed piezometers, and surface water samples combined with the site specific soil and groundwater hydraulic data. Prior to injection activities, AST performed a remedial design characterization (RDC) using a combination of nested discrete interval micro wells and continuous soil profiling that included lithology classification and speciated contaminant analyses approximately every two feet. The RDC data supplemented existing site information to create a high density conceptual site model (HDCSM) which was used develop the pilot test design. The monitoring and micro well network were used to verify the horizontal and vertical reagent distribution during the BOS 100® injections. To monitor performance, groundwater samples were collected from the pilot test well network and the nested streambed piezometers pairs (installed 2 ft and 4 ft below the streambed). Based on the performance of the pilot test, the full scale PRB was installed over the course of two events, in the fall of 2015 and spring of 2017.

SOLUTION
7,350 POUNDS BOS 100® at staggered 2 ft injection intervals that ranged from 6.5 to 34 ft bgs. To ensure effective cross sectional distribution, four rows of injection points on a 5 ft triangular grid (43 total points) were installed. AST fabricated a custom bracket that was bolted to the foot of the direct push mast to maintain the 25° drilling angle.

RESULTS
The observations made at the micro wells and streambed piezometers demonstrate that effective distribution of the BOS 100® was achieved during the pilot test injections. The analytical data from 12 of 15 micro wells installed in the PRB displayed significant contaminant mass reductions following the pilot test and full scale implementation. The eight streambed piezometers located directly downgradient of the PRB have exhibited decreases ranging from 88% to 100% and have illustrated time-trends consistent with the expected mechanics of a PRB. Concentrations from the pilot test area continue to remain compliant with North Carolina 02B surface water standards. 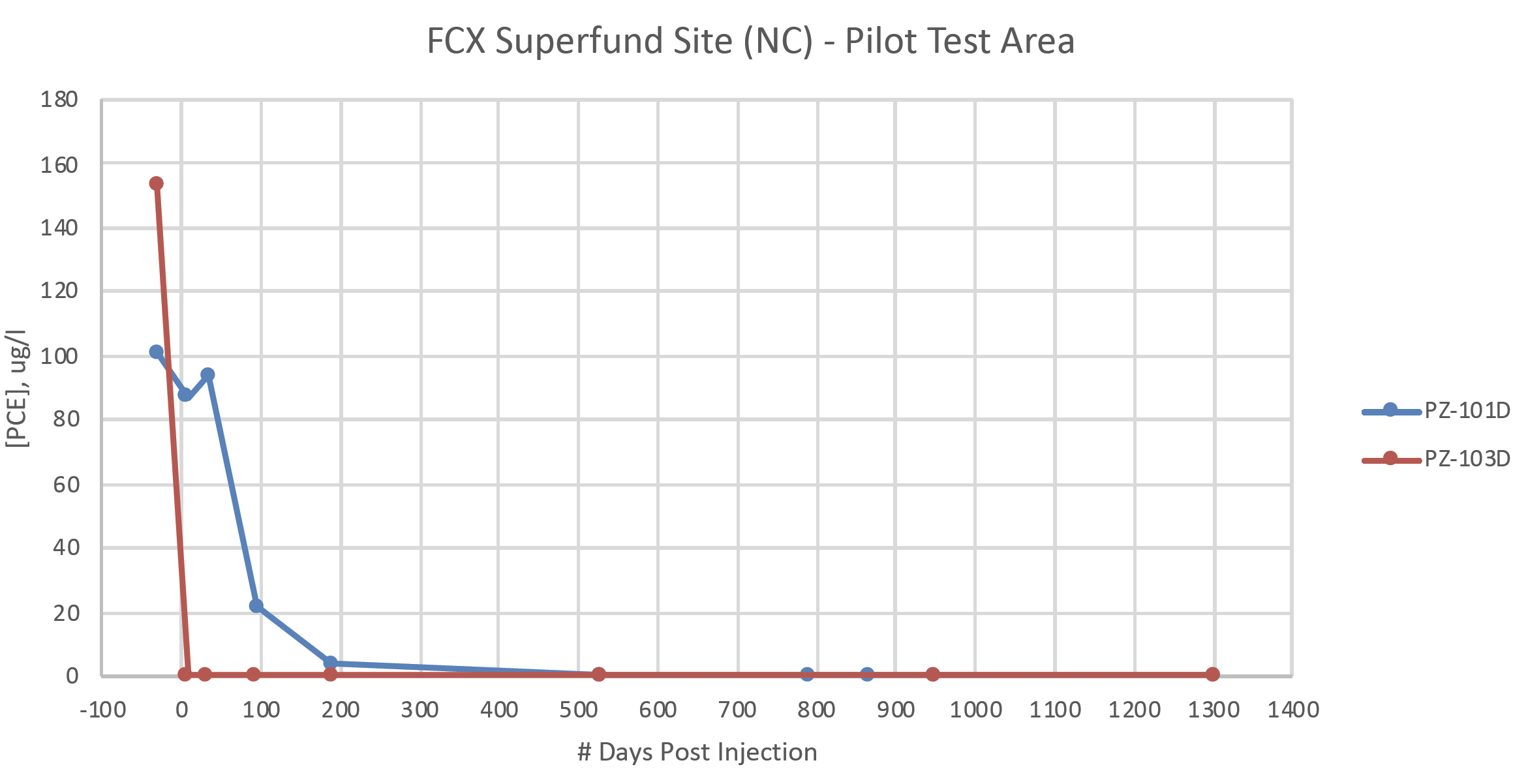