ABSTRACT
Marshall Iron & Metal in the City of Marshall, Michigan, operated as a railroad maintenance yard from 1899 to 1931 and a foundry from 1938 to 1960. Most recently, it served as an auto salvage/metal scrapyard from 1961 to 1996. Excavation and disposal of soil and debris were completed in the fall of 2015. During these activities, light non-aqueous phase liquid (LNAPL) was observed in an offsite monitoring well. A remedial investigation (RI) to delineate the LNAPL occurred in 2016. The RI included installing three soil borings, three monitoring wells and performing a rapid LNAPL screening using a laser induced fluorescence (LIF) tool at 21 locations. In the spring of 2021, a quantitative remedial design characterization (RDC) focused on quantifying contaminant levels and refining the LNAPL CSM was performed. BOS 200+® emplacement was completed in November of 2021. Measurable LNAPL has been reduced, and biological degradation within the BOS 200+® activated carbon platform sustains continued contaminant degradation.

• The impacted groundwater was measured between 8 and 13 feet bgs, residing within silty sands, sandy silts, fine- to medium-grained gravelly sands, and sandy gravels.

CHALLENGES
The primary challenge was ensuring effective distribution of suspended slurries in the more coarse-grained soil where numerous underground utilities were present.

OBJECTIVES
The primary objective of the remedial effort was to reduce the LNAPL mobility and to enhance the reduction of TPH mass by establishing a platform for carbon adsorption that can manage the LNAPL in the short term, while allowing long-term treatment utilizing the BOS 200+® biological processes to degrade the TPH mass from which the mobile LNAPL was emanating.

APPROACHThe 2021 RDC data were instrumental in the development of a quantitative CSM for the LNAPL source and solute plume. The RDC included the installation of 23 soil borings, 23 temporary monitoring wells, and the collection of over 125 soil and 30 groundwater samples for TPH analyses. Bench testing determined the density, solubility, carbon range, and adsorption characteristics of the LNAPL. These parameters guided the project manager in assessing the quantity of BOS 200+® needed to achieve project goals. Field pilot testing was performed to determine injection point spacing and fluid volumes required to distribute the BOS 200+® in the subsurface. The full scale BOS 200+® emplacement design was developed by combining all available data from the historical RI, the RDC, and the bench and field pilot testing. Full-scale injection consisted of 59,250 pounds of BOS 200+® emplaced in segregated injection areas based on lithology, contaminant mass concentrations, and contaminant mass distribution in 2021, as shown in Figure 1.

RESULTS
The RDC data demonstrated that saturated TPH sorbed mass (> 20,000 mg/kg) varied with depth and lithology. Significant TPH mass was found in the saturated sand and gravel regime. Monitoring well gaging before and after pilot testing and full-scale implementation demonstrated substantial reductions in measured LNAPL thicknesses, as shown in Figure 2. Genomic sequencing determined that native bacteria were present to support the biological degradation of the predominant petroleum compounds prior to  injections; however, the richness of the microbial population was relatively limited. Post-implementation microbial testing demonstrated an increase in microbial abundance and richness. At 6 and 12 months after full-scale injection, an abundant and rich population of degraders and supporting microbes persists, see Figure 3. A 91-100% reduction in measurable LNAPL has been achieved to date. 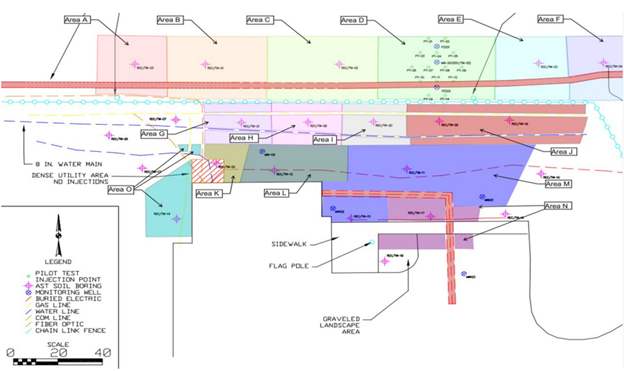 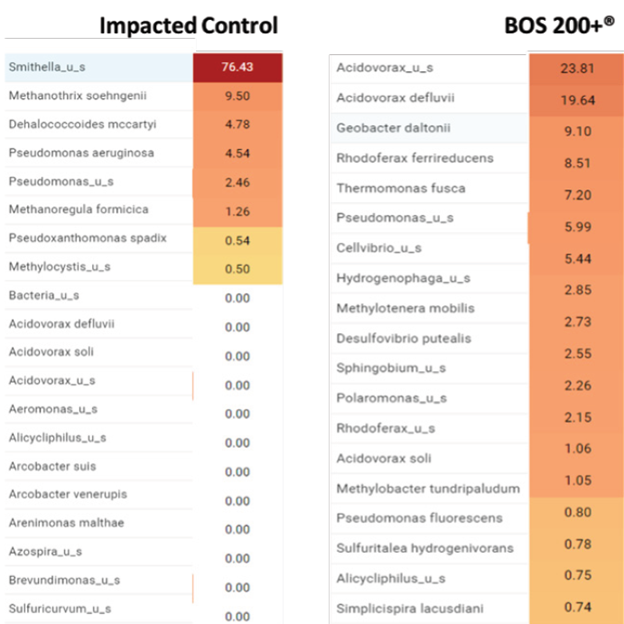 Figure 3.
Microbial Population Prior To Bos 200+® Injection And 12 Months Post-Injection