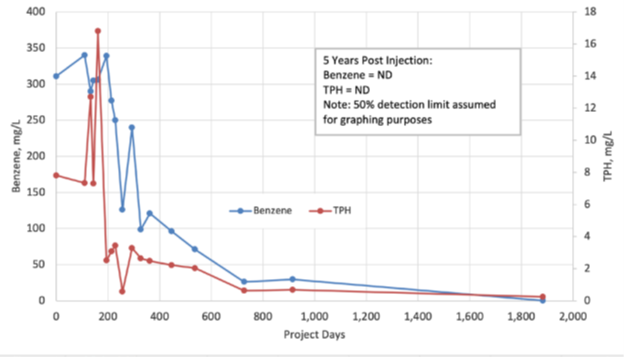 ABSTRACT
The subject facility is an active pipeline and petroleum storage site in the Gulf Coast Region where a leaking aboveground storage tank (AST) created a large dissolved and LNAPL plume. BOS 200+®, a modified version of BOS 200®, was applied over a large area during a 6-month period in 2017. Results to date indicate that LNAPL levels have been eliminated or significantly reduced. In addition, benzene and TPH levels have decreased an average of 96.3% and 97%, respectively. A No Further Action determination has been requested and is pending.

APPROACH1,110 soil samples were collected as part of a large RDC in early 2017. The sample results were used to create an optimized and surgical BOS 200+® design. All samples were analyzed at the RPI Project Support Laboratory at no cost.

The majority of the injection locations were completed using direct push injection techniques. In one area, shallow refusal was encountered (weathered shale), so the Pre-Drill technique was used to reach the target treatment depth

RESULTS (5 Years Post Application)
LNAPL
• The total number of wells with measurable LNAPL prior to remediation: 15