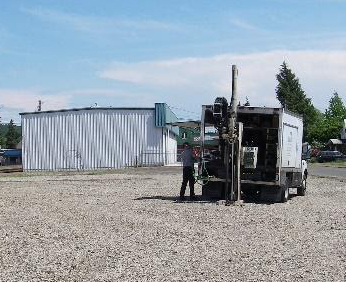 CHALLENGES
In 2015, prior to the potential sale of the property, a Phase I Environmental Site Assessment (ESA) and subsequent Phase II ESA were undertaken. The Phase II ESA identified elevated concentrations of carbon tetrachloride, ethylene dichloride, and chloroform in the area of the former grain elevator structure on site. Carbon tetrachloride was historically used at this site as a grain fumigant. During the site investigation, shallow groundwater was first encountered at depths between 10 and 13 feet (ft) below ground surface (bgs) within a sandy gravel unit just above a competent shale unit at 16 to 18 ft bgs. In each of the push-probe borings at the site, refusal was met in the competent shale unit. The project objective was to reduce groundwater concentrations below the risk-based concentrations (RBCs): carbon tetrachloride = 1,800 ppb, ethylene dichloride = 630 ppb, and chloroform = 720 ppb.

APPROACH
• Additional characterization to refine the conceptual site model was performed with the installation of 11 soil profiling locations (four were completed as permanent monitoring wells). A total of 90 soil and 11 groundwater samples were collected.
•In February 2016, a slurry of water and activated carbon impregnated with reactive iron (BOS 100®) was injected between 10 and 18 ft bgs into the area of source contamination identified by the RDC. The dosing of BOS 100® was based on the analytical soil and groundwater data obtained from the RDC investigation. Treatment at the site consisted of three target areas of varying BOS 100® dosage and a total of 87 injection points (7.5 ft triangular grid). Based on calculations of residual mass and adsorption isotherms, 10-17.5 pounds of BOS 100® were injected per injection horizon.
Reagent price = $42,800
•All compliance wells were thoroughly redeveloped post-injection.