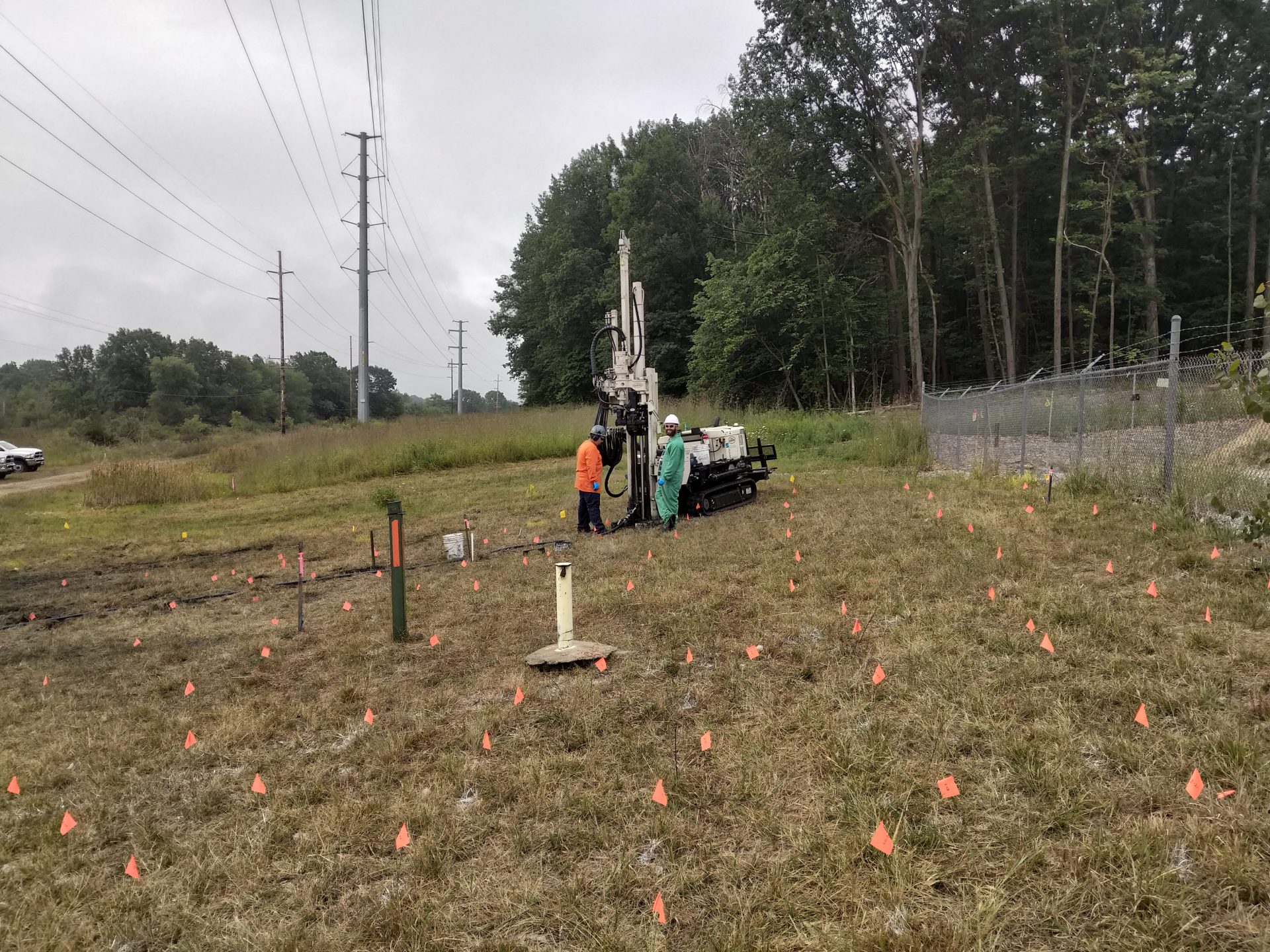 SUMMARY
Failure of a fitting at a petroleum pipeline transmission meter station in Michigan resulted in the release of approximately 1,700 barrels of gasoline fuel in June 2000. Due to access issues and compatibility concerns with multiple buried pipelines through the area of remediation, an innovative technology was required that could be implemented within the constraints present at this facility. The selected option had to remove LNAPL and provide significant reductions in total sorbed and dissolved phase mass, control further plume migration beyond the area of treatment, and be implemented without compromising the integrity of the buried petroleum transmission lines.

CHALLENGES & OBJECTIVES
•  A project challenge was working safely within close proximity to buried fuel transmission lines. In addition, the required safety offset created a large swath of impacted subsurface media that could not be directly remediated. The design had to account for additional mass entering the treatment zone from beneath and around the pipelines.
• Furthermore, a shallow excavation and facility infrastructure (buried fence line and pipelines) provided preferential pathways to the surface. Daylighting and short circuiting had to be properly managed in order to properly install the BOS 200® into the subsurface effectively.
• Project objectives were to achieve significant reduction in groundwater concentrations and to eliminate measurable LNAPL in site monitoring wells

APPROACH
• Approximately 30,000 tons of impacted soil were removed to approximately 4 ft where accessible. Free product recovery via groundwater extraction and long-term groundwater monitoring was conducted at the facility following the release; the groundwater extraction system was shut down
in 2012.
• Based on the RDC results, it was determined that three injection events of BOS 200® would be required to accomplish the site clean-up goals.

RESULTS
• One year following the completion of the first injection event, resampling of soil and groundwater was performed to determine mass removal and reestablish the baseline for the second injection event. Total sorbed mass removal estimates across the treatment area averaged approximately 85% and 65% for benzene and Total Volatile Petroleum Hydrocarbons (TVPH) respectively.
• Performance groundwater monitoring has continued quarterly since completion. Results as of the August 2019 groundwater monitoring event indicate average benzene removal at 82% and TVPH at 92% when compared to pre-injection analytical data.
• The occurrence of LNAPL is now sporadic and isolated to an occasional sheen in 2 monitoring wells within the source area compared to year-round persistence with measurable thickness in 5 monitoring wells prior to treatment.